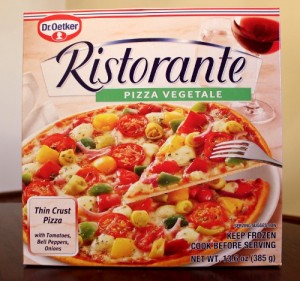 Eileen Chadnick (Chadnick Communications) was engaged to provide a media relations program to support the launch of Dr. Oetker’s Ristorante pizza into the Canadian marketplace in 2003.

Dr. Oetker has always been well known for its baking product line, notably the Shirriff brand. While internationally, Dr. Oetker was the overall leader in Europe for its Ristorante pizza, it was virtually unknown to the Canadian marketplace outside of its baking lines. This would be the company’s first foray into the frozen food category in Canada.

The media relations program was critical to support the company’s sell-in efforts to major food retailers as it had not yet had full buy-in from key players.

From strategy through execution we produced a multi-faceted program that positioned the pizza as the ‘adult’ pizza and helped it stand out from the crowd of other offerings. We targeted both trade and consumer media. We developed media materials, key messages and media training for company spokespeople as well as third party experts (nutritionist and trend expert) whom we engaged as part of our strategy.

RESULTS: With an extensive media outreach campaign we achieved extensive, high quality coverage (with photos and key messages) in food columns across Canada in both regional and major newspapers. As well as TV appearances.

Get in touch - I look forward to hearing from you.